In this city founded by the Celtic tribe of the Helvetians, parts of roman structures are still visible today - the theatre, the amphitheatre as well as the Cigognier-sanctuary. Thanks to the Erleb-AR app, these can now be viewed in their antique glory.

Amphitheatre: Death was often part of the drama

Like the famous Colosseum in Rome, the amphitheatre of Aventicum/Avenches is a performance edifice: along with gladiator fights, the entertainment included wild animal hunts, public executions, or even acrobatic shows. Built in the early 2nd century AD in the outskirts of the city, leaning against the hill now occupied by the town of Avenches, the first amphitheatre was a plain, unadorned building

It was modified and transformed around 165 AD, reaching 105 by 92 m. Its simple outer wall was then replaced by a massive structure forming a monumental crowning wall 7.5 m high, displaying semi-circular niches as well as pilasters on the outer side 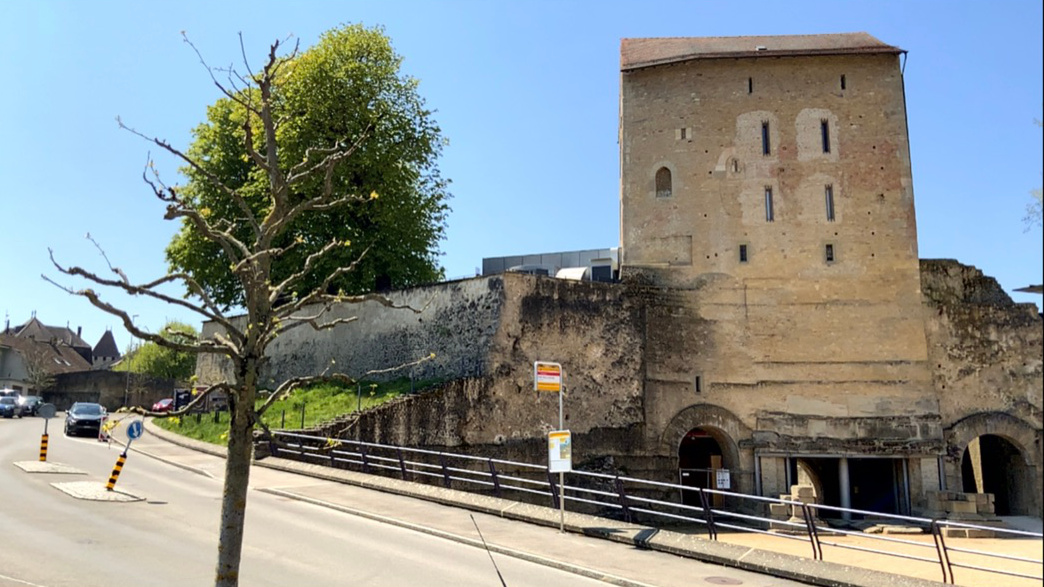 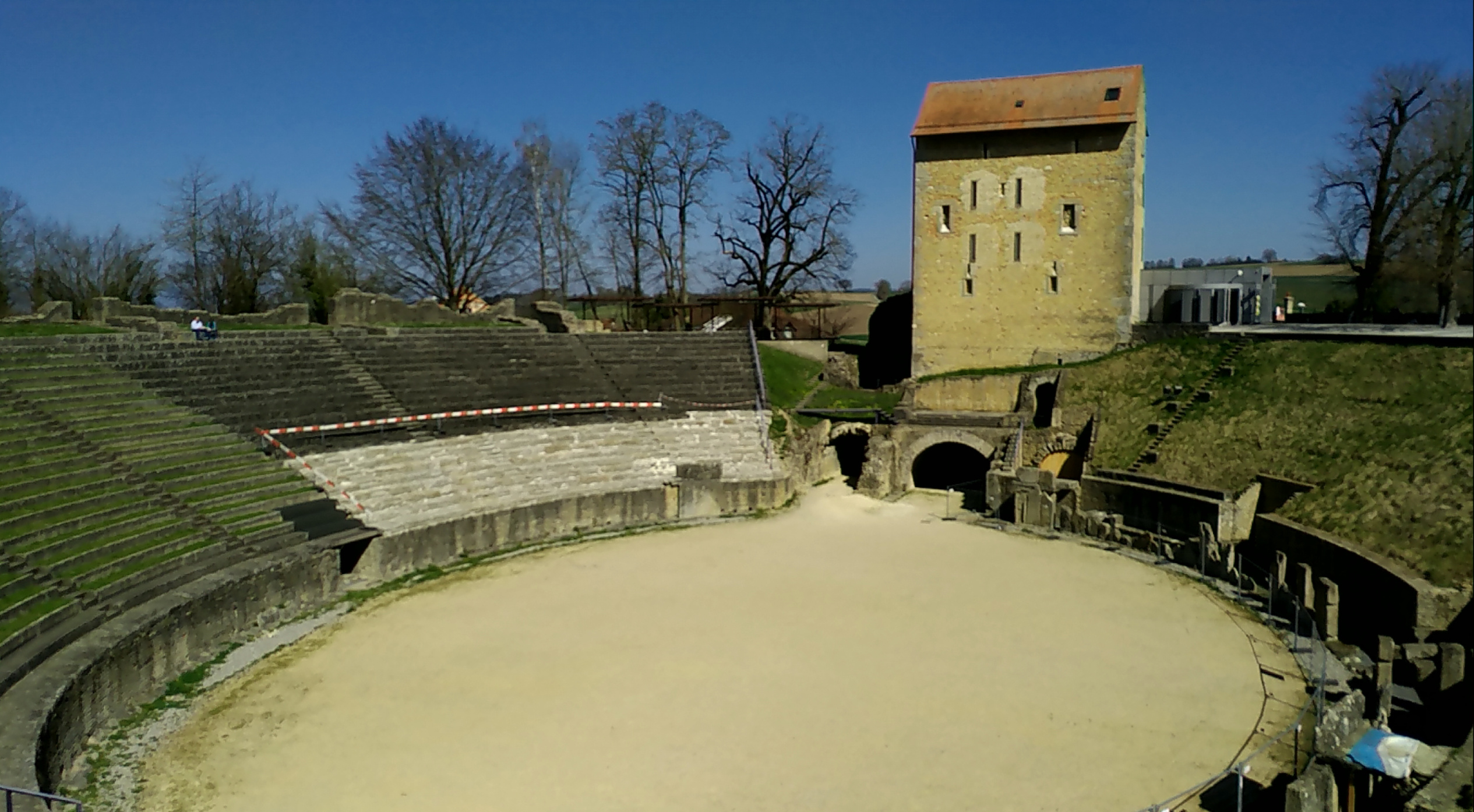 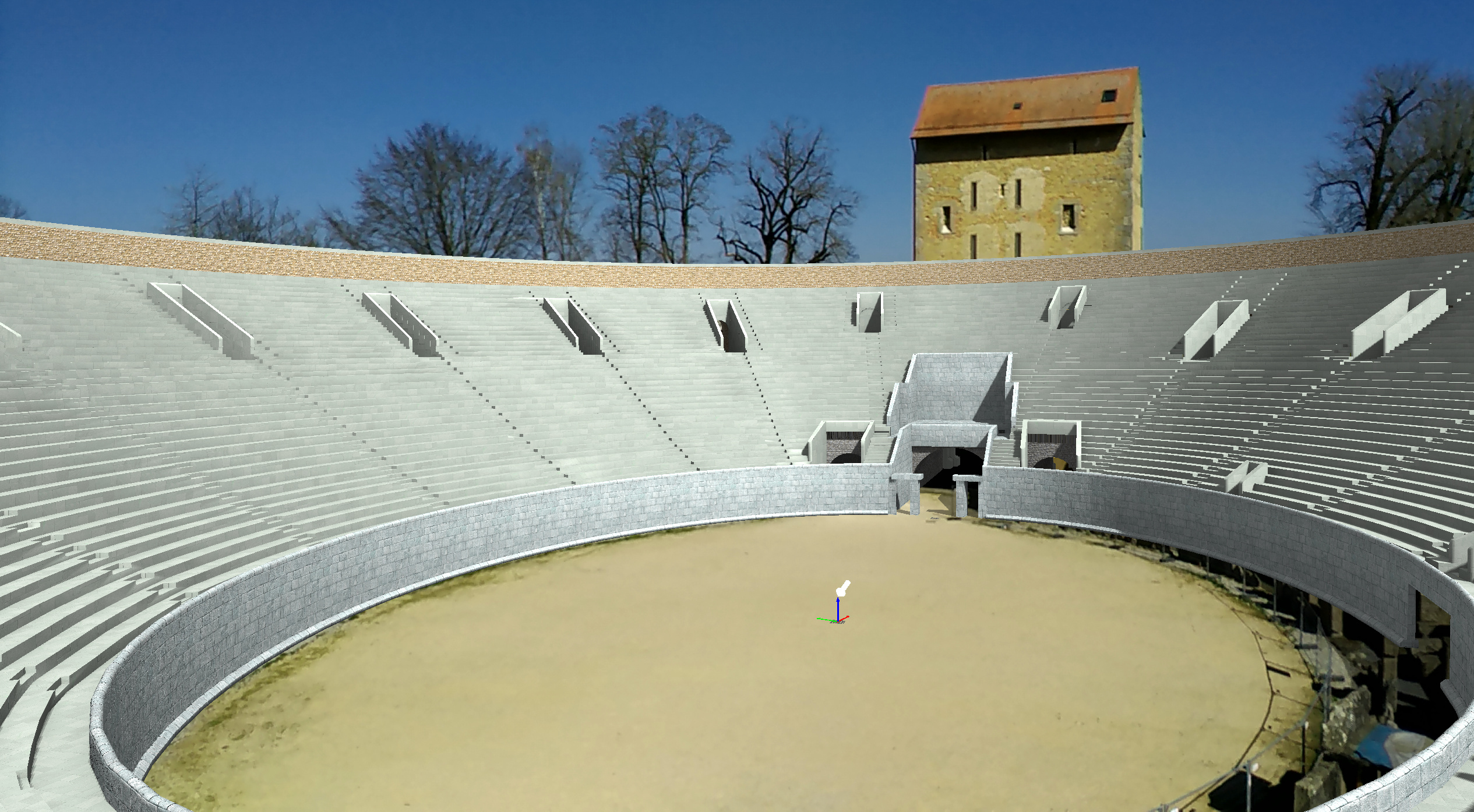 On the city side, vaulted gates enabled to enter the arena, which was more than 50 m long. With a height of 2.5 m approximately, the wall demarcating the arena was topped by large stone slabs to the north. In the southern part, blocks arranged vertically would delimit a passage along the arena: this corridor, present on one side only, is a distinctive feature of the amphitheatre of Avenches.

The building was destroyed between the late 3rd and the early 4th century AD. In the late 11th century, a 23.5 m high tower was built above the former eastern door. Since 1838, this tower shelters the Roman Museum. A visit is very much recomended.

Erected around 98 AD, the Cigognier sanctuary forms an architectural ensemble with the theatre opposite. Its name derives from its single limestone column still standing since Antiquity, which used to be a nesting spot for storks. It was built to the south of the main urban areas, in a swampy sector which had been cleaned beforehand.

Its remains were cleared mainly from 1938 to 1940, as part of an activity program for the unemployed. This is where the famous gold bust of the emperor Marcus Aurelius was discovered, hidden in a sewer. 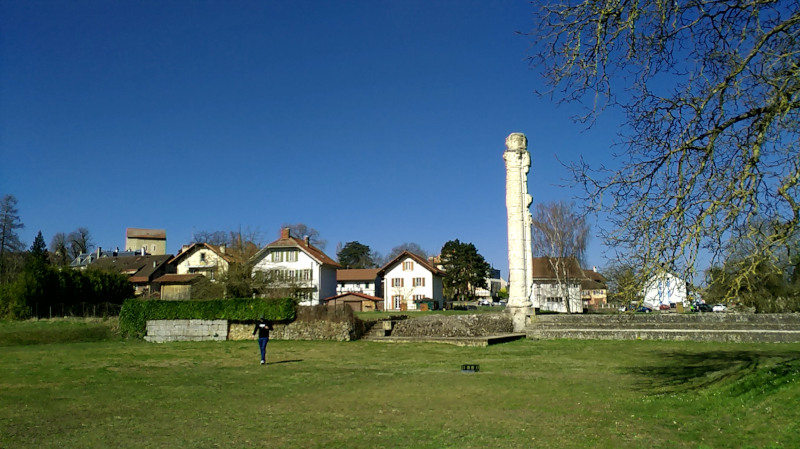 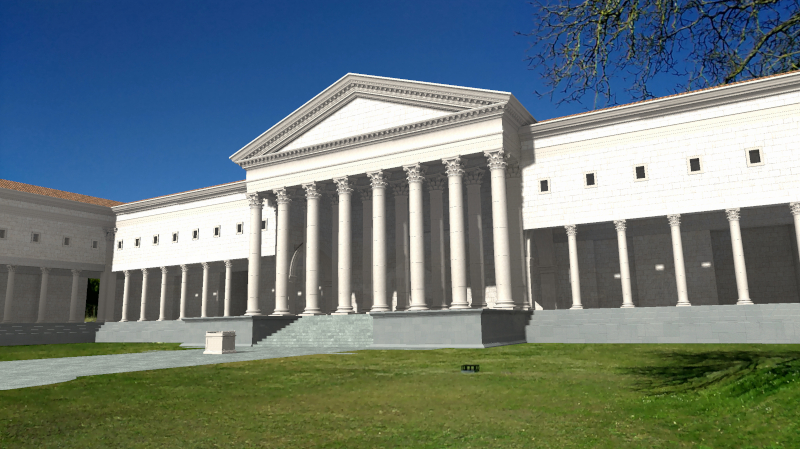 Striking by its impressive dimensions (about 107 x 77 m) and with a plan directly inspired from a monument built in Rome by the emperor Vespasian (the Forum Pacis), this sanctuary consists in a ∏-shaped colonnaded portico around a large courtyard (80 x 61 m). A temple is attached to it, projecting slightly into the courtyard and extending some 20 m beyond the rear wall of the portico. Resting on a massive podium, the temple proper, with its eight-columned façade, reached a total height of 20 m.

In the axis of the temple façade, a 53 m long paved pathway was probably used during processions between the theatre and the place of worship. A massive foundation block identified on this path could mark the location of a monumental altar. The Cigognier sanctuary was not devoted to a single god, but to an entire pantheon which was important to the Helvetian community, and probably also to the cult of the deified emperor.

The theatre is an unavoidable feature in every ancient city of some importance. In Aventicum/Avenches, this public building was built in the early 2nd century AD, and was connected to the Cigognier sanctuary facing it. Like many other ancient monuments, the ruins of the theatre of Avenches were used as a “quarry” until the mid-19th century, where one would extract rubble stones for other constructions, thus destroying large parts of the structure.

This is a “Gallo-Roman” theatre: instead of a back wall of stage with two to three floors, theatres of this kind had a stage wall sloping down symmetrically towards the centre, which was occupied by a small stage building of one floor only. With a façade width of 106.25 m and a depth of 66.4 m, the theatre of Aventicum could accommodate 12,000 spectators, which makes it one of the largest edifices of its kind. 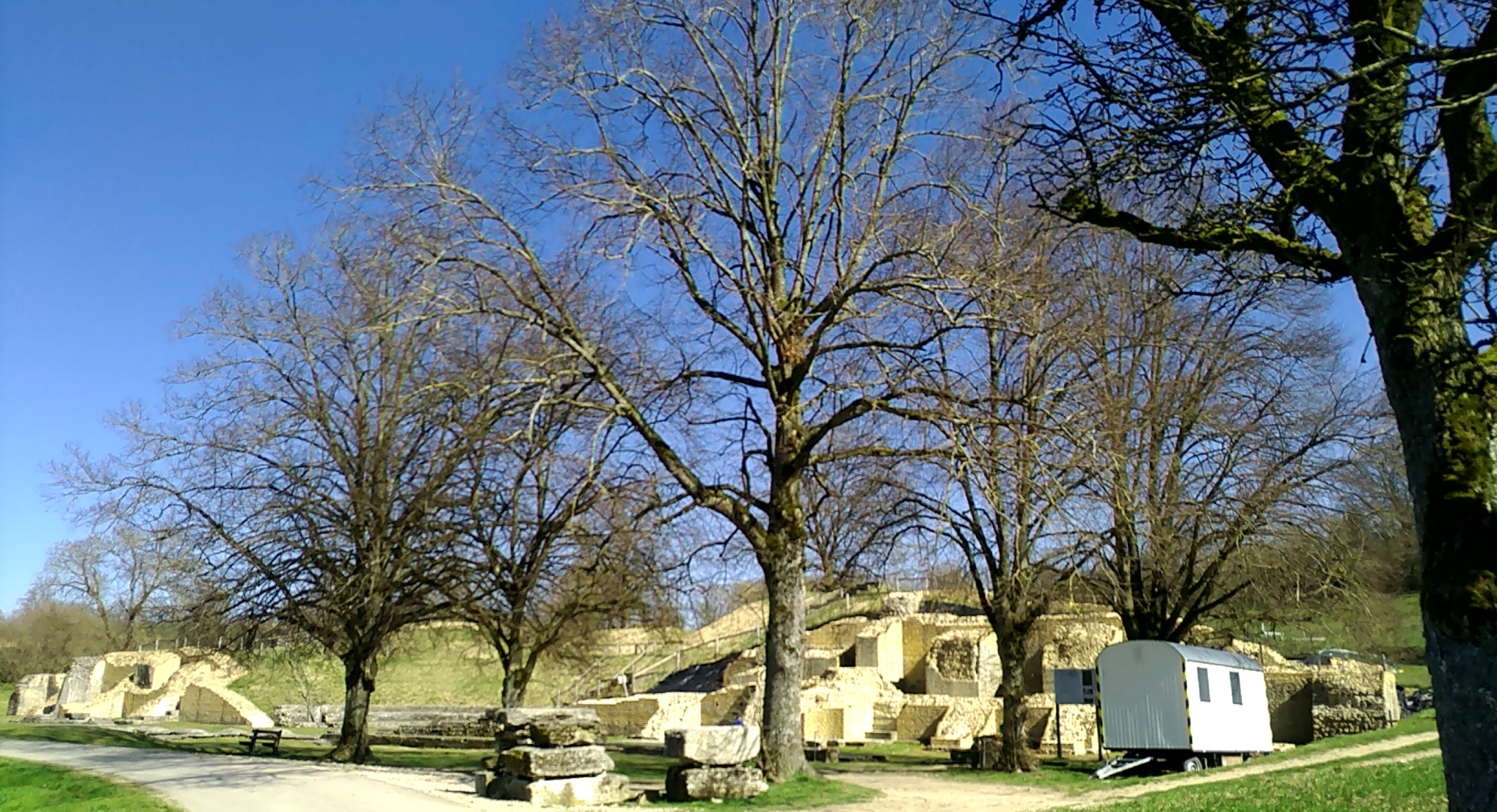 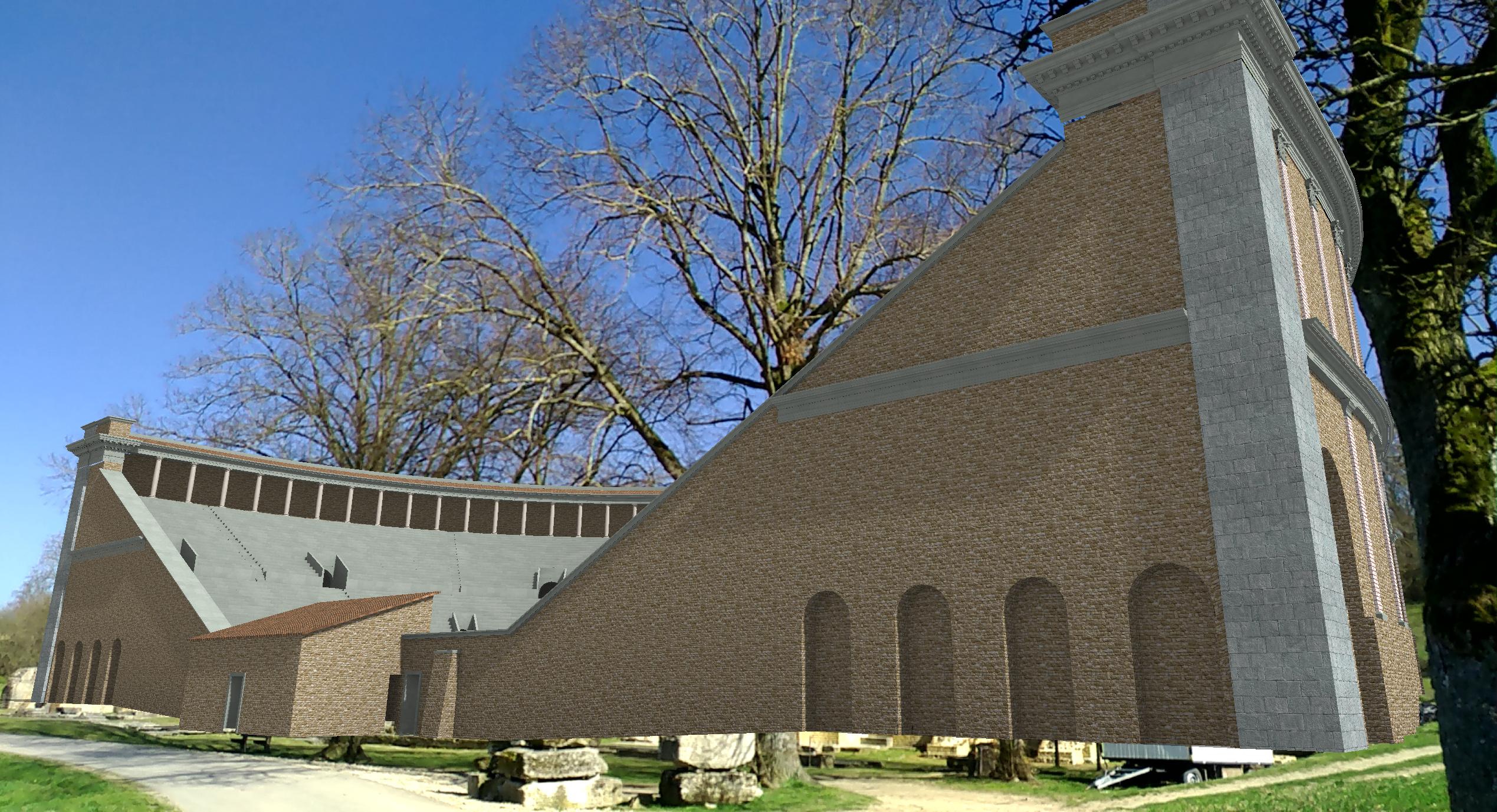 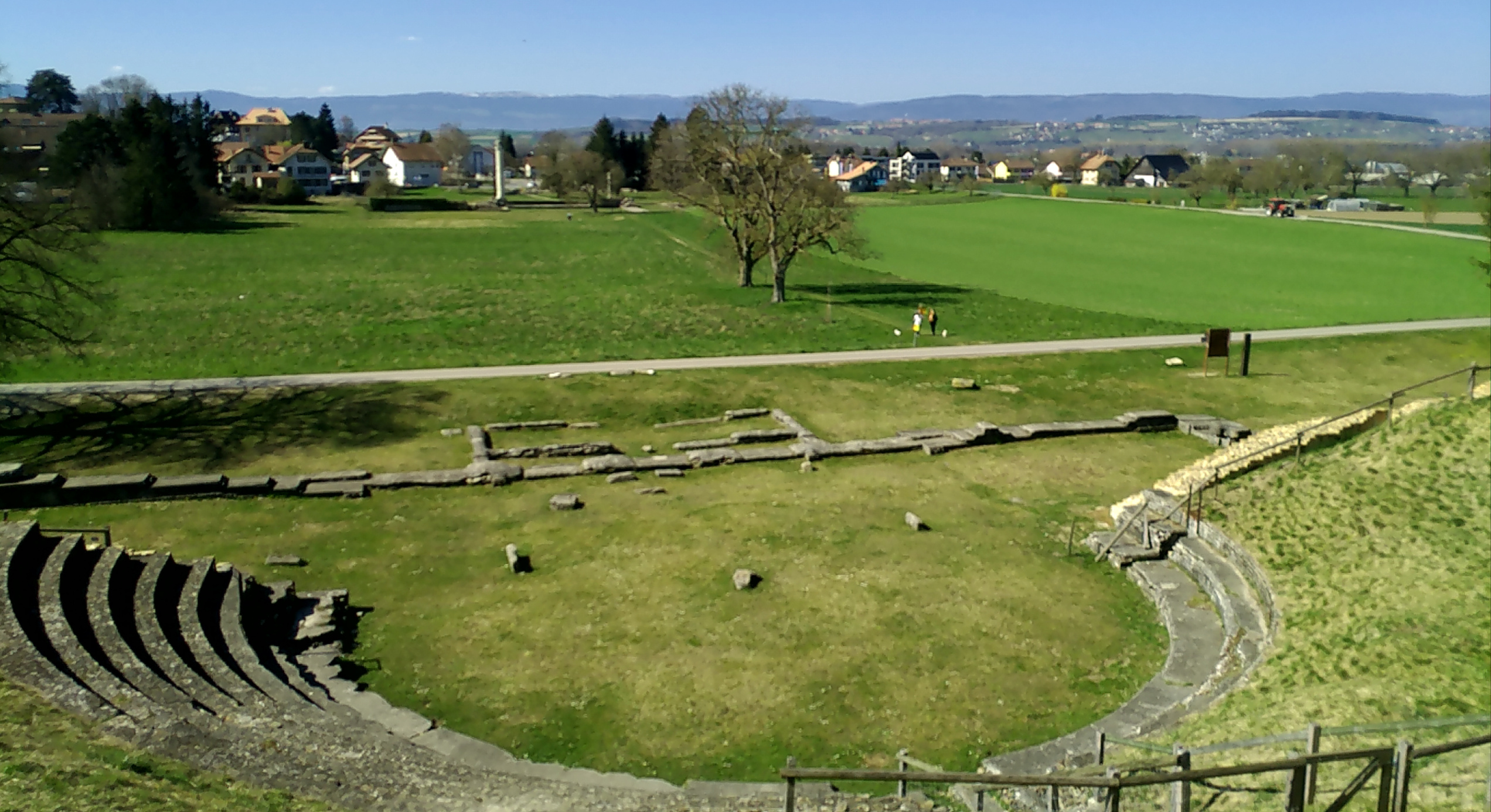 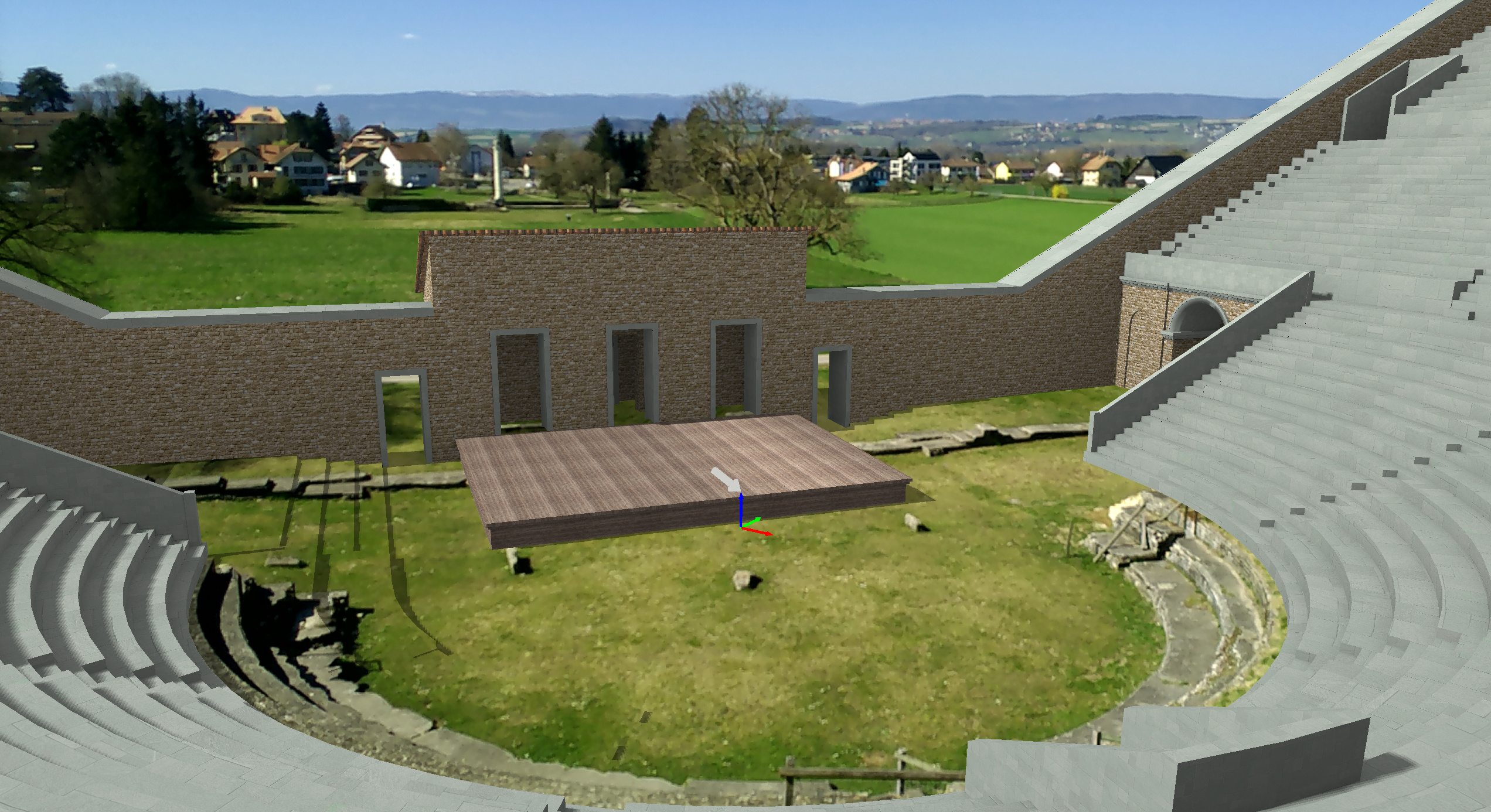 Performances would take place either in the semi-circular orchestra or on the small wooden platform of the stage building. The Roman theatre of Avenches displayed a mixed architecture, with walls made of small yellow limestone blocks of Neuchâtel and large blocks of grey shelly sandstone, thus creating a duotone effect.

What kind of performance could be enjoyed in Gallo-Roman theatres? The evidence is scarce, but one can imagine a wide variety of genres, including mime, pantomime, dance, song, musical performances or mythological shows, but also sacrifices and rituals related to the cult of the emperor.